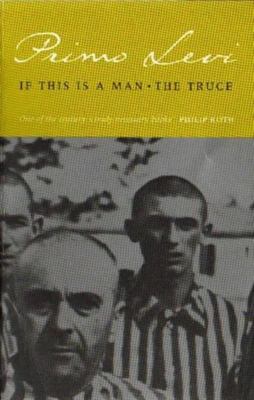 If This is a Man : The Truce

With the moral stamina and intellectual pose of a twentieth-century Titan, this slightly built, duitful, unassuming chemist set out systematically to remember the German hell on earth, steadfastly to think it through, and then to render it comprehensible in lucid, unpretentious prose. He was profoundly in touch with the minutest workings of the most endearing human events and with the most contempible. What has survived in Levi's writing isn't just his memory of the unbearable, but also, in THE PERIODIC TABLE and THE WRENCH, his delight in what made the world exquisite to him. He was himself a -magically endearing man, the most delicately forceful enchanter I've ever known- - PHILIP ROTH

'The death of Primo Levi robs Italy of one of its finest writers...One of the few survivors of the Holocaust to speak of his experiences with a gentle voice' GUARDIAN 'A life-changing book.' Daily Express THE TRUCE: 'One of the century's truly necessary books.' Philip Roth 'One of the greatest human testaments of the era.' SCOTSMAN IF THIS IS A MAN: 'This book is the most profoundly affecting of all those written by survivors of the Holocaust. Sober and passionate, it depicts an experience of the ultimate nightmare related by a man both sensitive and resilient, who speaks for all those made dumb forever.' THE WEEK 'Levi's book still has the power to make one weep of the greatest and alas, the defining atrocity of our century. Yet throughout, the fear, the endless hunger and the pain are leavened by tiny grains of affection, of generosity, even humour. Which is why this masterpiece is not merely terrifying but also endlessly readable. It is, ultimately, about moral as well as physical endurance, about hope, and about the survival of man's unquenchable human spirit.' DAILY MAIL 'Levi builds a serene sense of Man's worth. This is an extraordinarily endearing testament.' LONDON DAILY NEWS 'His tone throughout the memoir is dry-eyed and understated. He makes few references to himself, and they are rarely flattering. But by the end of this short book one is left with a monument to human dignity.' SUNDAY TELEGRAPH 'In describing Levi's account of his experiences in Nazi camps it is tempting to say that words are not enough, that language crumbles before this unforgettable testament. But the book's achievement is precisely to abjure such hyperbole to name the unnameable. Eschewing a desire for recrimination, Levi offers a lucid document of a descent into hell which is courageous and unflinching.' DAILY TELEGRAPH

Primo Levi was born in Turin in 1919 and trained as chemist. Arrested a member of the anti-fascist resistance during the war, he was deported to Auschwitz. His experiences there are described in his two classic autobiographical works, IF THIS IS A MAN and THE TRUCE.